A Brief History of Sodus, NY

The Town of Sodus was formed in January 1789, by Court of General Sessions of Ontario County. The name of the town was derived from the Native American word "Assorodus", meaning silvery water. It is the central town on the northern border of the county, with Lake Ontario on the north.

In 1794, under the direction of Charles Williamson, agent of the Pultney Estate, the first settlement in the Town of Sodus was constructed. The first road, from Palmyra to what now is known as Sodus Point, was cut. In the same year, Williamson built a pleasure yacht, a gristmill, a saw mill, and an inn, that was managed by Moses and Jabez Sills, had the town surveyed, and drew up plans of a city.

Amos Richards (1795), Elijah Brown (1796), John and Frederick Boyd (1798), and Ammi Ellsworth (1801) were some of the early settlers. Dr. William Nixon Loomis settled in 1801 and built a gristmill, a saw mill, a forge, and several homes. Col. Peregrine Fitzhugh came from Maryland in 1803, bringing his family and approximately 40 slaves. The slaves were eventually freed and established their own colony on the Point. 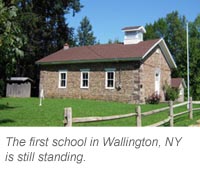 The first church (Baptist) was organized in 1805. Elder Seba Norton was the pioneer minister; and the first school in the area was taught by Mrs. Armsbury and is still standing in Wallington, New York.

A lighthouse was erected at Great Sodus Bay in 1825 and the harbor has long been considered the best harbor on the south shore of Lake Ontario.

The Shaker religion and the State-wide celebration of Arbor Day (1888) both had their origins in the Town of Sodus.

Ready to Join Us?

Learn about the benefits of becoming a member and Join now by completing a Membership Application.